I'm trying to build a patch that basically  read multiple video streams from iPhones and pads through NDI.

I saw in resolume all NDI channels cone under sources; however, here, it seems I can only read one through video capture. I can change the stream through NDI virtual input. Yet I cannot have simultaneous ones.

Whay do you think?

How To... ? •
G [ANSWERED] NDI watcher 4 not working in latest version of Isadora

I am trying to use NDI watcher 4 in latest version of Isadora, but I get a message saying that Isadora is using NDI 5 and I should get a NDI watcher 5, and the plugin is disabled. I can't find any NDI watcher 5 in the plugins page.

I am working on a Hybrid performance and need to get a live feed into Isadora. Screen capture plugin is not working with Zoom or Meet. So I thought of using NDI and Skype.

Can anybody help me with that.

Hi everyone, I'm working towards a project that uses a lot of live video, which is also going to be simultaneously streamed, so I'm trying to reduce the pain points of making it all work.

one of those pain points will always be syncing audio due to video input lag. since we'll be using multiple cameras it'll be really important to have consistent latency so that we've even got a chance of synced audio.

So the question is:
What hardware do I need to get 4 camera feeds into Isadora simultaneously with minimal (or at the very least consistent) latency?

I accept that the Atem mini would seem like a solid solution as its a single device so it'll have the same latency across the board, but it would limit what we're doing to what the ATEMmini is capable of internally as opposed the broad suite of options that isadora offers. I also haven't found a way to control the ATEM with Isadora in a way that isn't too fiddly to be viable (I'm using Windows so ATEMosc isn't an option)

The project is a simultaneous live performance a theatre and a live streamed event, so the audio synchronisation thing is a bit of a headscratcher to be honest. At the moment the plan is to broadcast the video stream using isadora's RTMP capabilities, but that does come with kinks to iron out. Since the audio cues are all coming from isadora they may need to be triggered at slightly  different times for the stream than they are for the room (ie. for tightly choreograophed dance to look right the music will need to play a number of ms later for the stream than it is in the room with the performers). Cimilarlyy we also have some live audio spoken from the cast coming into isadora that needs to be broadcast which will have its own latency complications. If it was only one camera and 2 performers then I could get away with syncing their speech by running radio mics through the audio input on the camera. That way (in theory) that audio will have the same latency as the video. however, with 4 cameras I need to make sure that each camera has the same latency if I want things to sync up at all.

In terms of any amplified speech in the theatre, I'm sort of coming to terms with the idea that my performers may be working with 2 mics at any given time; one for the theatre, and another for the stream. that way their speech isn't having to go through isadora before being amplified.

These are the headaches anyway.

Thanks in advance if you have any genius insights, or obvious solutions that I'm missing.

[ANSWERED] ndi outs drive to a Overload and crush

Hi all,
I'm really neewby using Isadora ans I'm sure it's my bad, butt every time I actvate NDI out on my laptot after some time load start's increase and i allways end to a freeze.

Troubleshooting and Bug Reports •
T [ANSWERED] Does Syphon work with M1 Macbook Pro? Or NDI instead?

I'm using Zoom OSC with Isadora for an interactive installation and as a part of an orchestra piece, and for the show I'm planning to run a portion on an intel 16" MBP fully spec'd but I've been seeing and hearing about the M1 MBPs and wondering if that would be a better option. I'm enjoying using Syphon on the current computer because it's very low latency, I'm wondering if that's the case on Apple silicon or if NDI is pretty quick.

Basically, does Syphon work on M1 macs? If not, is NDI latency as low?

Thanks! This has been a challenge to figure out and decide.

How To... ? •
T [ANSWERED] any good tutorials on using NDI with isadora?

...and I still haven't gotten around to doing any experiments really. A mix of personal life and work mounting up on top of me really.

Are there any good tutorials that I can follow to get me started with using NDI in isadora that anyone would recommend?

I've essentially forgotyten everything that I learned in my initial research so some kind of step by step intro would be amazing.

I have noticed that NDI Output is grayed out on my MacBook pro M1 max, Isadora 3.1.1 ARM, USB key.  The watcher actor works fine.

Attached is a still 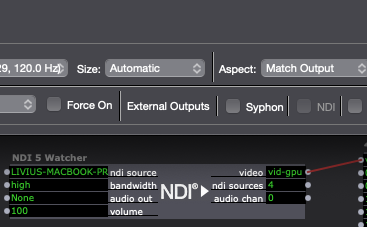 Hi, In the future when NDI and IP video become the norm, will the graphics card still do the actor processing, or does it use CPU?

I'm curious bout using NDI to connect live cameras to isadora, I've noticed that there's an NDI watcher actor but I'm curious about the limitations.
I'm not really too keen on investing in a lot of NDI encoding hardware if it doesn't play nicely with the rest of my setup.

So here are my questions:
1: I'm assuming that I'll only need an NDI encoder and that the NDI watcher will take care of the decoding... is that correct?

2: how many different NDI feeds can I run on the same network into Isadora without any trouble?

3:I'm thinking of switching from using USB capture devices to an NDI based setup, are there any big downsides to doing that which I should be aware of?

I need to send some very small NDI streams, 150 * 5 pixels. When I send these with Isadora any NDI receiver reports the height as width in its previews. Also the pixels are not correctly formed, there is a strange jagged edge and there seems to be some padding, also whenI specifiy a height of 6 the stream reports 5. When I try the same task using te NDI SDK in c++ these tiny streams work perfectly. I didnt bother to test larger streams, or to probe more, but you can see using the SDK tools when Isadora sends small NDI streams they are not correctlyt formed.